We’re located along the Susquehanna River, at 319 N. Front St. in Harrisburg, Pa.

Click here to learn more about parking in Harrisburg. 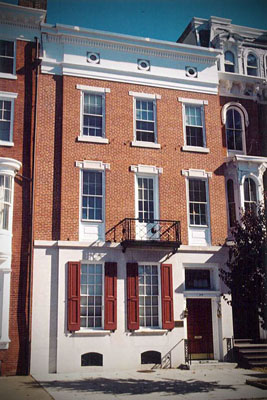 About the James McCormick Cameron House

The APSCUF building at 319 N. Front St. was built around 1850 and is called the James McCormick Cameron House because the so-named grandson of U.S. Sen. Simon Cameron owned the property. James, a noted industrialist, banker, and part-owner of businesses and Lancaster County tobacco farms, lived at his family’s home at State and Front streets until buying 319 N. Front St. in 1927, after marrying at age 62. He made extensive improvements to the building and lived here until his death in 1949. His funeral, as well as his wife’s in 1944, took place at 319 N. Front St. The building changed hands a number of times before attorney John D. Killian sold it to APSCUF in 1976. Numerous people have heard “ghostly” footsteps in the building at night — perhaps the footsteps of James McCormick Cameron “haunting” the APSCUF building to this day.