As APSCUF celebrates its 80th anniversary, we are looking back at our history. The following is reprinted from the April 1969 APSCUF Journal.

APSCUF in the Years Ahead: Changes That Should Occur

By August 31, I shall have resigned the Presidency of the Association of Pennsylvania State College and University Faculties several months before my term will have expired so that I may spend a sabbatical year in England. The editor of the APSCUF Journal has asked me to comment upon my tenure of nearly four years as APSCUF President and over ten years on the Executive Committee. He indicated that I should look at the future as well as summarize the past. 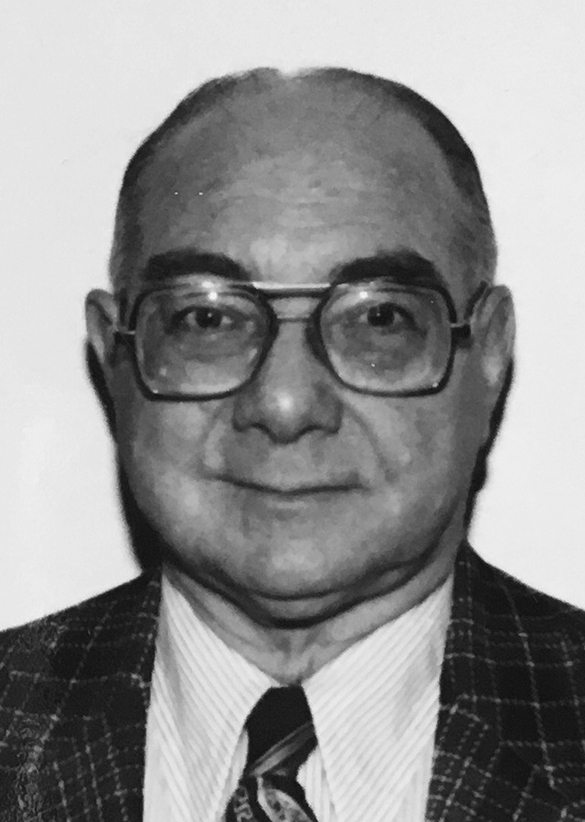 First, a few words about the past, which an historian cannot resist. Over the previous decade the Legislative Committee of APSCUF has built up many good contacts in Harrisburg, so that we now have access to many offices where our voice is listened to. Most of the credit for this fact must go to Norman King of Shippensburg State College, the excellent Chairman of our Legislative Com­mittee. Through these contacts we have been able to assist in bringing about significant improvements in our salary schedule and in some areas of fringe benefits. I must say, however, that in this respect we seem to run hard in order to stand still. And economic matters take so much of our time that we neglect other affairs of interest to the Association and its membership.

Perhaps this is the place to make the transition from past to future. I believe that the organizational structure of APSCUF may well be out-moded. We are facing the prospect — in the present General Assembly — of being included in a general bill to provide governmental employ­ees with the right of collective bargaining. If this happens, and I believe it will, we must become far more highly organized at both the state and local levels. Without doubt the passage of a negotiations bill will precipitate a struggle for exclusive bargaining rights in the colleges with such groups as the American Federation of Teachers, the American Association of University Professors, and the Pennsylvania State Education Association. The ques­tion that we shall have to face is whether to unite with one of these giants or to pursue an independent course with APSCUF. Even if the decision is to unify, I am reasonably sure that the faculties of the state-owned institutions will have to operate as a separate subdivision. So long as our salaries and major fringe benefits are distributed with an even hand from Harrisburg, we shall have to be organized to bargain as a group of fourteen schools at the state level. 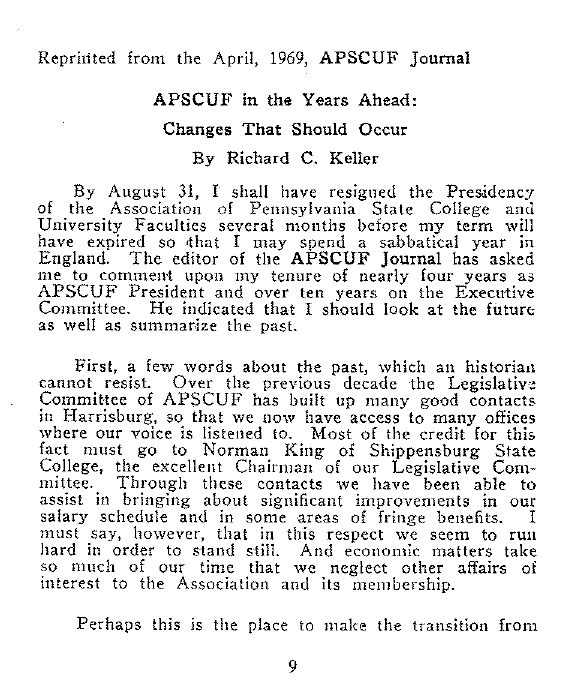 This same situation will almost certainly force some organizational changes upon us. At the present time the Executive Committee, which consists of one delegate and one alternate elected by the local APSCUF unit of each institution, sets the policies for the organization and mans all the committees as well. The President then conducts the day-to-day business of carrying out the policies adopted by the Executive Committee. I believe that the workload will have to be redistributed by permitting the policy group to choose committee members from the entire membership of the Association, so that we can make use of talent wherever it appears. We shall need, I think, an executive secretary with a permanent office in Harrisburg, and he would have to direct a team of negotiators (which could be similar to the present Legislative Committee). It becomes obvious that all of this cannot be done with the present APSCUF dues structure.

On the local campus the APSCUF unit, assuming it survives an election to choose a bargaining agent, will have to deal with the administration on such matters as teaching loads, local tenure practices, office space, and the like: for we hope that state-wide bargaining will involve only salaries and economic fringe benefits. This means that we can no longer afford the kind of local which conducts desultory meetings once or twice a year and puts on a lackadaisical campaign for members. This Association cannot survive if it does not have strong local units representing the overwhelming majority of faculty and is able to sit down and talk on even terms with the administration on each campus.

These are the kind of decisions which will be facing us within the next year or so. Perhaps the future course of the Association already will have been determined when I get back from England in the summer of 1970. Perhaps I shall return to see several more universities instead of state colleges, a State Board of Directors to implement the Master Plan, an AAUP censure list free of names of any of our state colleges, and a Board of Presidents for which I need a scorecard. In any case, I wish my successor the best of good fortune, and I hope to hear that the Association of Pennsylvania State College and University Faculties has had a long string of achievements.

Richard C. Keller was a faculty member in the history department of Millersville University (when it was Millersville State College)