Campaign for the Future of Higher Education meets in Boston, plans next steps

Last weekend APSCUF President Steve Hicks and Executive Council member Jen Bacon attended the second gathering of the Campaign for the Future of Higher Education. Here are their reports: From Steve…

All of us at APSCUF are concerned with the “future of higher education.” That’s why we’ve been involved with the formation of the Campaign for the Future of Higher Education, which met last weekend at UMass Boston (which has a grand site surrounded by water). The central issues discussed, beyond the next steps for the Campaign, were student financing, contingent faculty conditions and our relationship with the Occupy movement.

APSCUF representatives joined faculty and staff from 18 states to share concerns and issues and plan for the future.

To reinforce its principles, the Campaign created a think tank — the Center for the Future of Higher Ed — in May. The next few months will see three pieces from the Center, all speaking to issues signaled by the beginning of the academic year (for more details see Dr. Teri Yamada’s report from the meeting).

After some previous email exchanges through the listserv Wiggio, it was agreed that the Campaign should, for the time being, be run by a steering committee consisting of the groups who had signed off on the principles, including APSCUF. That group will select a working committee, who will craft the work of the Campaign. All financing, again, for now, will be based on a voluntary contribution basis.

All in all, it was a valuable sharing experience. Many states are facing both the same budgetary pressures and the same educational agendas as Pennsylvania: sometim 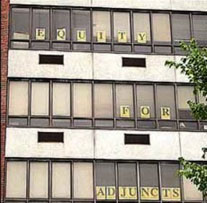 I just returned from an interesting conference in Boston this week about the Campaign for the Future of Higher Education. This national movement is attempting to take on some of the underfunding of public higher education, and contingent faculty issues were featured very prominently in the discussions, representation and deliberations this weekend.

On the one hand, I suppose I take some small comfort in the fact that our Collective Bargaining Agreement is much better than most in many regards. Contingent faculty at the State System do have access to health care benefits and pension benefits. There are paths to tenure-track status for contingent faculty (though they are convoluted and hard to enact). Contingent faculty are both able, and encouraged, to participate in APSCUF. In Ohio, part-time faculty do not have the right to collective bargaining, for example.

But on the other hand, it was clearer than ever how much work remains. Contracts are rarely issued for more than one semester at a time, and contingent faculty often don’t get those contracts before you begin teaching. They have very little assurance from year to year that a job will be available next year.

For those who are interested in learning more about a new organization specific to the issues of contingent faculty, please visit the New Faculty Majority website.

Our union is heavily involved in the Campaign for the Future of Higher Education, and that bodes well for the possibilities that we can improve working conditions for contingent faculty at West Chester and at other PA State System schools. I’m taking some of the very good arguments I heard this weekend back to my tenured and tenure-track colleagues – so that they better understand the ways that our lives are tied together in this battle for the future of public higher education. The right to Academic Freedom – for example — as a central tenet of quality instruction in a university setting – is of central concern. We cannot possibly think that we are supporting our students’ success adequately if they don’t know who will be teaching their classes when they register for them, and if our faculty members do not have enough job security to invest their time and energy into improving the institutions for which they teach.