Dr. Michele Papakie, secretary of State APSCUF, delivered the following comments at a rally to advocate for higher-education funding April 12 at the Pennsylvania Capitol. 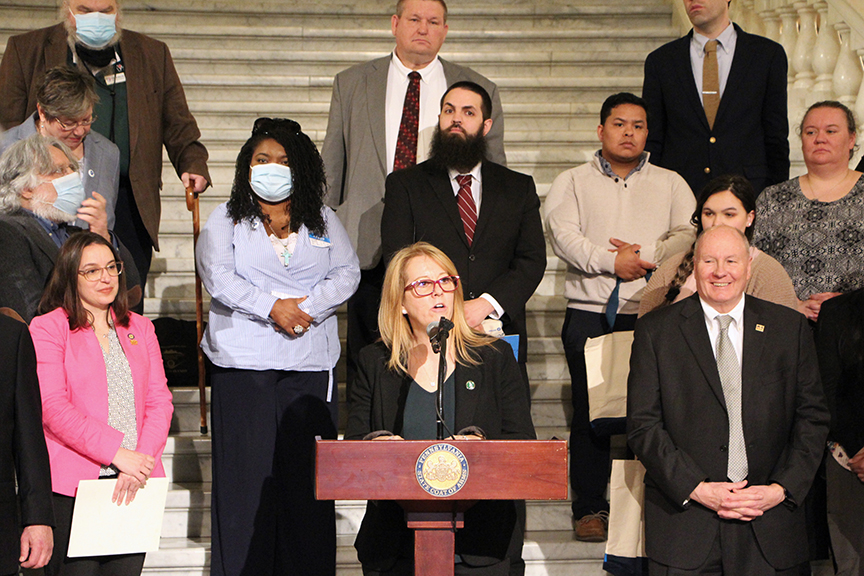 That’s what it really boils down to, right? How we view the world. It drives how we make decisions every day.

For those of us who have been around for at least half a century, we have a broad perspective. We’ve experienced a lot of things. For example, when a global pandemic takes center stage, we can frame it in a way that helps us to cope with it fairly easily … wait, that might not have been the best example of what I’m talking about …

Let me briefly reflect on my perspective of the Pennsylvania State System of Higher Education. In 1986, I was a naïve, first-generation college student who aspired to be a Pulitzer Prize-winning journalist. I chose Indiana University of Pennsylvania, because it was affordable and far enough away from home that I could pretend I didn’t need my family anymore. I joined the Air National Guard reserves in the spring semester of my freshman year, and I went off to basic training that summer.

I got the G.I. Bill. Back then, it meant I got about a $300 stipend for books, and my drill check was around $60 a month that covered all the ramen and Spaghetti O’s I could eat.

I didn’t worry too much about tuition, because I took out loans each semester. I wanted a class ring, so I took a job at the dining hall until I amassed the $250 I needed to buy it, then I quit.

I dropped out of school as a junior because I got pregnant. I took courses, one at a time, at night at the Community College of Allegheny County, and some of my military schooling transferred to IUP, and I finally graduated on the seven-year plan.

My student-loan payments began at the same time my COBRA payments did, and, oh yeah, I had a hungry baby who had to wear cloth diapers because I couldn’t afford disposable ones … but, I was on a roll with school, so I continued, eventually earning my master’s and my doctorate while working full time in my field, juggling a military commitment, as a single mom … yadda, yadda, yadda. I used to tell this story as one of resilience and persistence.

But, honestly, that was a picnic compared to what our students are dealing with today.

First of all, in the late ’80s, early ’90s, Pennsylvania provided its State System 75% of its budget, so students like me only had to come up with the other 25. Those numbers have flipped over the past three decades.

My students are graduating with way more debt than I did. And you might say, “Well, they decided to go to college, right? They knew what they were getting into. I had to pay my student debt. They need to pay theirs. It builds character and responsibility.”

Unless you have a college-aged child of your own — or you teach — I very seriously doubt you know what it’s like to be a college student today.

Today’s college students were born between 2000 and 2004-ish. Our country was at war the entire time they’ve existed. In high school, they’ve dealt with everything from cyberbullying to school shootings. COVID-19 robbed them of the important rights of passage, like prom and graduation. They struggle with their sense of self, their gender identity, their sexuality. They’ve watched mass shootings unfold at concerts, movie theaters, malls and grocery stores. And, today, they see the awful images of Russia’s unprovoked attack on innocent Ukrainian people, and they have to study with the threat of a nuclear war looming in the background. Inflation is at a 40-year high — they struggle with food insecurity; they can’t afford the gas to get them to and from their classes, and they can’t afford to live on campus!

Pennsylvania ranks 49th in higher-education support. Why are we not investing in our students? They need us, and quite frankly, we need them! They are the people who are going to be leading us through all the nastiness we are facing today.

The Nellie Bly Scholarship Program is a first step in the right direction. Providing $4,000 a year to students attending a PASSHE university could make all the difference in the world. My PASSHE degrees lifted me from a lower-middle-class upbringing to an upper-middle-class lifestyle of my own. It opened many doors for my son and his wife, also, two more proud products of the State System. I want our legacy to continue, but I’m not sure public education in Pennsylvania will even exist at this rate when my grandbabies are ready for college.

I have been connected to the PASSHE system as a student, an alumna, a donor, a parent, a manager, a professor, a department chairwoman and an extremely proud APSCUF member. My perspective is very broad, as it has spanned 36 years.

I’m here to tell you — the time is NOW for our legislature to finally take responsibility for its State System of Higher Education. INVEST IN OUR STUDENTS. Pennsylvania’s future depends on it.