Harrisburg, Pa – Pennsylvania could lose more than 758,000 votes for the upcoming November election with the passing of the new voter ID law that requires voters to present a photo identification card. Of the acceptable forms of identification, college IDs make the list; however, only college IDs with expiration dates listed will be acceptable.

Students who attend a PASSHE university from out-of-state face an additional challenge; only driver’s licenses or identification cards issued by the Pennsylvania Department of Transportation are considered acceptable forms of ID, leaving out-of-state students voiceless unless universities find a way to incorporate an expiration date on their student IDs. 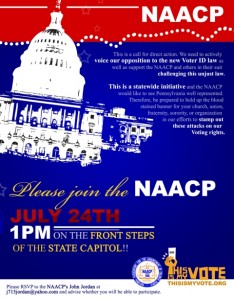 The NAACP will hold a rally in opposition to the new voter ID law on the captiol building steps July 24 in Harrisburg, Pa

Colleges across Pennsylvania are preparing to include expiration dates on student IDs for incoming freshmen. For thestudents whoalready hold an ID, providing stickers with expiration dates appears to be the most financially feasible option for universities.

Some legislators do not believe this is an issue.

“It was a conscious decision we made. If a university wants to issue an ID that can be used in voting, they will issue an ID with an expiration date,” Rep. Daryl Metcalf (R-Butler), chairman of the House State Government Committee, said in an article on The Morning Call.

Unfortunately, this still does not fix the problem. What expiration dates will be placed on the IDs and how will they be done? Students who enter as freshmen all have “expected” graduation dates; however, actual graduation dates vary due to students finishing earlier or later than expected. Will universities have to differentiate between fall and spring graduations? Or, will a general date be provided for each class? These are among a slew of questions universities will have to figure out in addition to the estimating the actual cost of providing the stickers.

Several groups including: the Committee of Seventy, the Advancement Project and the Pennsylvania chapters of the Common Cause, the NAACP, the League of Women Voters, the American Civil Liberties Union of Pennsylvania, and the Philadelphia AFL-CIO are advocating for a delayed implementation of the law, which the Corbett administration denied.

The American Civil Liberties Union of Pennsylvania and the Advancement Project have filed a lawsuit against the Commonwealth questioning the constitutionality of the law. A state court hearing is scheduled for July 25 in Harrisburg, Pa.

The NAACP is sponsoring a rally on the steps of the capitol building in Harrisburg on July 24 at 1 p.m., one day before the start of the hearing. If you are interested in participating in the rally email John Jordan at j715jordan@yahoo.com