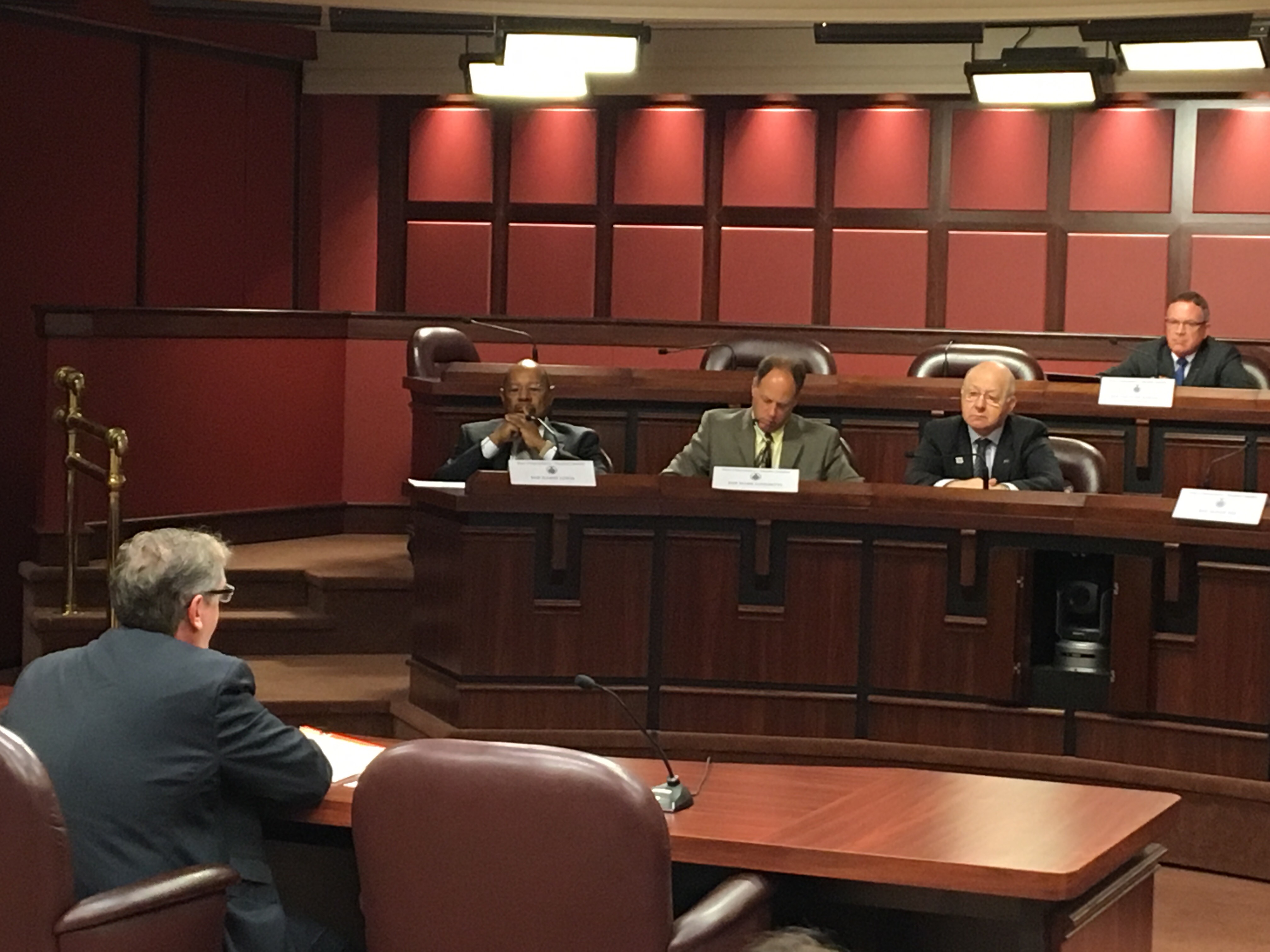 APSCUF President Dr. Kenneth M. Mash, left, testifies before the Joint Committees on Education Nov. 15. His comments as prepared are below. Photo/Kathryn Morton

Chairmen and members of the committees,

Thank you for the opportunity to testify today on what is an extremely important issue. My name is Dr. Kenneth M. Mash, and I am the president of the Association of Pennsylvania State College and University Faculties (APSCUF). APSCUF represents about 5,500 faculty and coaches who work at Pennsylvania’s state-owned universities.

The sustainability of our State System of Higher Education is of critical importance to the future of our Commonwealth. Not only do our universities heavily contribute to our state’s economic well-being — a recent study showed that for every $1 in money allocated to the System, $11 is returned to the economy — but a well-educated citizenry is crucial for businesses and industries and is even more crucial for those businesses and industries that may wish to locate here in the future. Of course, a well-educated citizenry is also vital for Pennsylvania’s proud democratic tradition.

In that enterprise, our universities have played an extremely important role. Our universities have been and continue to be the universities for working-class Pennsylvanians. A recent study by the Keystone Research Center and Pennsylvania Budget and Policy Center confirmed what many of us already understood to be true: “Because of the State System’s greater access for working families, its mobility rate — defined here as the share of all students who come from the bottom 60% of families AND then move into the top 40% of earners (total pre-tax individual earnings) as adults in their early thirties – is 22%, compared to just 14% for the top 10 elite private colleges.” (https://www.pennbpc.org/pennsylvanias-great-working-class-colleges)

Interestingly, that mobility rate is highest at some of those universities that have recently struggled (e.g., 29 percent at Cheyney University and 26 percent at Mansfield). The most disturbing element of the study was that should the 2012 cohort be propelled up to the top 40 percent at the same rate as those who attended college between 1999 and 2004, the overall mobility rate will fall 12 percent, and that is due to a drop in the number of students from bottom 60 percent families who can afford to enroll at our universities — 41 percent in 2002, and 35 percent in 2013. (http://www.pennbpc.org/sites/pennbpc.org/files/KRC_PBPC_EnginesofMobility.pdf, p. 9).

The mission of the State System is unequivocally articulated in Act 188 of 1982: “The State System of Higher Education shall be part of the Commonwealth’s system of higher education. Its purpose shall be to provide the highest quality education at the lowest possible cost.” I do not think one has to read too far into that language to infer that our universities were meant to be Pennsylvania’s working-class colleges. Our universities afford the opportunity for students to achieve the American Dream.

A good deal of money was spent on the State System’s sustainability study that was carried out by NCHEMS — money that might have been spent on student scholarships to aid those who are struggling. The State System already did a study in 2013 that was conducted by Maguire Associates. That study examined the potential impact of increased costs on enrollment at state-owned universities, and it concluded that an increase of more than $3,000 in total college costs would lead to drastic reductions in enrollment. Moreover, the effects would be felt the worst at the five most cost-sensitive universities: Cheyney University, Mansfield University, Clarion University, Edinboro University, and California University. It is not a coincidence that, years later, those five universities are the ones confronting difficulties.

The Maguire study wisely focused on total college costs. While the media and many policy-makers usually hone in on tuition, for families who decide what college to attend or whether to attend college at all, the bottom line is the most important factor. What we know about total college costs is not good. According to a recent study, tuition and fees now account for nearly three quarters (73 percent) of educational costs at State System schools compared with half that level (37 percent) in 1983–84. Further, total costs adjusted for inflation have risen faster for students because of large increases in the costs of room and board, which have increased by 76 percent (a hike of $4,567 in 2016 dollars) since 2000 compared with 51 percent ($3,351) for tuition and fees. Total college costs have risen by almost $10,000 since 2000, from about $15,000 to about $25,000 per year, and they have gone from one-fifth of median family income to more than one-third (35 percent). (https://www.pennbpc.org/students%E2%80%99-expense-rising-costs-threaten-pennsylvania-public-universities%E2%80%99-role-upward-mobility)

The bottom line is that it is impossible to discuss the System’s sustainability without discussing the State’s allocation. How issues are framed are how they get discussed. Too often we hear about the drops in enrollment (The System’s enrollment is about what it was 10 years ago.) and financial problems without discussing what has happened to funding to our System.

The reality of the matter is that even with this year’s 2 percent increase (and we do heartily thank you for that), the inflation-adjusted funding for the State System is more than 25 percent below the 2007–08 level and a third below its 2000–01 level. Further, when one looks at Gross State Product, funding for the State System today is only 42 percent of its 1983–84 level. (https://www.pennbpc.org/students%E2%80%99-expense-rising-costs-threaten-pennsylvania-public-universities%E2%80%99-role-upward-mobility)

This only tells a part of the story. One also must look at how changes to funding of Commonwealth capital projects result in debt payments that have absorbed large portions of the universities’ educational and general funds.

Simply put, our universities have struggled because the Commonwealth has chosen to not fund public higher education at a rate that is sustainable. Pennsylvania ranks 47th out of the 50 states in per-student funding.

Responding to the cuts during the Great Recession, our universities sought to survive by raising tuition and fees and increasing enrollment. However, that response was limited because the bubble in the number of high school graduates was soon to burst. The increases in college costs have meant that students and their families have had to confront increasing debt or the choice to not go to college at all.

Increasing student debt does not serve anyone. While there is a reasonable argument to be made that students should be invested in their own education, those arguments ought to be modified by the realization that our economy is hurt when graduates are not making purchases or otherwise putting money into the economy, but are rather paying principal and interest to the banks. Further, it ignores the plain fact that public higher education is a public good that reaps benefits not just to the individual graduate, but also to the Commonwealth overall.

This is a real problem that reinforces the difficulties of families, particularly in struggling communities. The KRC/PBPC study found that the Commonwealth ranks 40th for the share of adults ages 25–64 with more than a high school degree. In more than half of Pennsylvania counties (35), this share is lower than any of the 50 states (i.e., lower than West Virginia’s 48.1 percent). (https://www.pennbpc.org/pennsylvania-higher-education-crossroads-boost-opportunity-and-growth-pennsylvania-needs-invest-high)

This pattern is likely to continue because of the low percentage of high school students who are seriously contemplating college — that is, the number of students and families who actually fill out FAFSA forms. The contrast between Pennsylvania at its northern tier and the southern tier of New York is particularly stark. New York’s counties show 5 to 25 percent more students filling out the forms. (https://www.pennbpc.org/pennsylvania-higher-education-crossroads-boost-opportunity-and-growth-pennsylvania-needs-invest-high) Since these numbers came before New York enacted its free-tuition plan, we might expect that this differential will increase.

Unless we are willing to concede that Pennsylvanians are less motivated or less intelligent than their northern neighbors — and we certainly are not — we must understand that something else is going on here, and I believe that affordability is the answer.

I say all of this not to take away from the fact that there are certainly things that should change at our universities. I do think that the current administration and Board are increasingly sensitive to costs at our universities. I am hopeful that the wave of universities that were “experimenting” with per-credit tuition (which could lead to 25–50 percent higher tuition rates) may be coming to an end. We were encouraged to see the Board respond to the university presidents who asked for permission to lower tuition for financially strapped students.

We see opportunities at some of our universities to engage in career technology, and even to be locations for dual enrollment where there are not career technical centers (CTCs). We think our universities, particularly in the northern tier, need to do more to assist students in filling out the financial-aid forms, regardless of what university a student may attend. We further believe that some of our universities should offer general associate degrees so that students who are forced to leave due to finances, military commitments, or other causes can leave with something in their hands.

However, our System cannot be sustainable without a real commitment from the Commonwealth. Our universities are the public universities in Pennsylvania. We must continue to make good on the promise of affordable, high-quality higher education. Pennsylvania cannot afford to be in a position of denying the American Dream to a generation.