In a move that surprised nearly all seasoned Harrisburg watchers, the state Supreme Court on Wednesday ordered, by a vote of 4-3, the redistricting plan offered by the Legislative Reapportionment Commission to be remanded back to the commission for a second try. To recap the action to date:

Which brings us to Wednesday’s announcement.

It’s important to keep in mind that a court has never overturned a redistricting map in Pennsylvania history. Good-government groups have characterized redistricting as legislators picking their voters, rather than voters picking their legislators. The process is acknowledged as partisan, even at times personal, with leaders making seats easier or harder to win for their own caucus members depending on whether the member is in or out of favor. The 2001 redistricting plan also faced legal challenges, but the state Supreme Court upheld the last decade’s map.

The state constitution sets out the following requirements for legislative districts: .” Chief Justice Ronald Castille voted with Justices Seamus McCaffery, Debra McCloskey Todd and Max Baer, to reject the plan, while Justices Joan Orie Melvin, Thomas Saylor and Michael Eakin dissented. The order did not include the court’s reasoning, but an opinion will be issued with the majority’s legal argument. 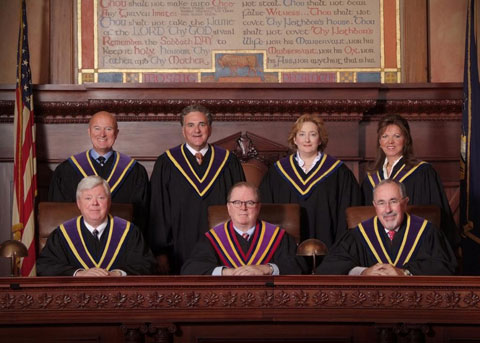 What does it all mean? First of all, the court has ordered the 2001 maps are still in effect “until a revised final 2011 Legislative Reapportionment Plan having the force of law is approved.” For the time being, candidates are running in the current legislative districts. It remains to be seen whether a new map will be approved in time for the 2012 election cycle.

Certainly, this will have a huge impact as many current legislators and prospective candidates had been making decisions based on the new maps — believing their approval by the court to be a foregone conclusion. The court order also pushes the deadlines for circulating and returning nominating petitions forward by two days. It’s important to remember this decision only affects newly drawn state senate and representative districts. The new congressional map still stands.

Secondly, this decision illustrates exactly what is at stake in off-year judicial elections. The state Supreme Court is the ultimate arbiter on many high-profile issues like redistricting, and if different justices had been on the court, this decision could have easily gone the other way. In fact, Chief Justice Castille had voted to uphold the 2001 maps a decade ago. The three justices that voted with him this time around – McCaffery, Todd and Baer – are all newly elected within the past 10 years. APSCUF endorsed Justice Todd in 2007, when she narrowly edged out another candidate for one of two open seats on the Supreme Court.

At this point, no one really knows what’s next. As Senate Majority Leader Dominic Pileggi said on his Facebook page Wednesday night, “this is uncharted territory.” The Senate Democratic Leader, Jay Costa, offered the following statement: “We are grateful that the Supreme Court honored Pennsylvania’s Constitution and Commonwealth voters.” Everyone involved with the Legislative Reapportionment Commission is now waiting for the Supreme Court’s opinion, which will provide guidance in crafting a new plan that will pass legal muster.