What our union does for us 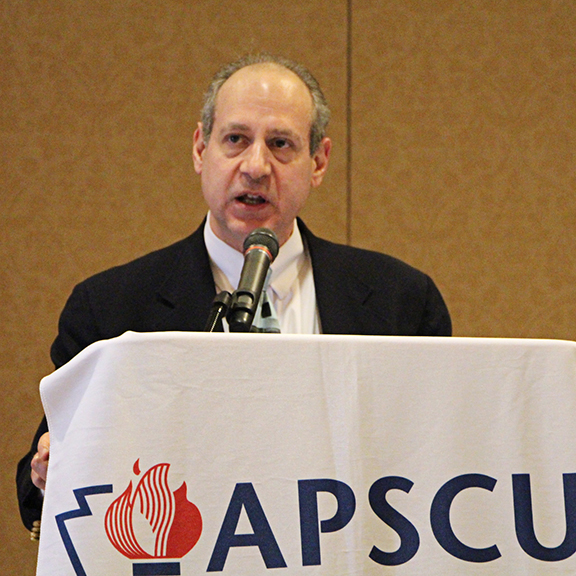 In the days ahead, our union confronts a prolonged and already bitter battle over our contract, set against an ongoing effort to privatize public higher education and eviscerate public employee unions. For Chancellor Frank Brogan of the Pennsylvania State System of Higher Education (PASSHE) and his legislative allies, our contract negotiation process is public theater. We have been cast as petulant, overcompensated, 17-hour-a-week employees protected by a cumbersome contract that provides swim coaches with $400,000 a year jobs. Political pressure to curb public employee pay and pensions is high. It is quite likely the greatest trial APSCUF has faced in our almost-80-year history. It is thus incumbent upon us to assess and, I trust, to reaffirm, our common commitments.

In his inaugural address, John F. Kennedy challenged Americans to “ask not what your country can do for you, but what you can do for your country.” As a union, we are not there. Our members are asking what our union does for them. It is a question we must be able to answer enthusiastically, if we are to move forward united against the challenges ahead of us. Let us then consider what our union does for us in several key areas. Please bear in mind: Our union provides core services equally to faculty, whether they are in the union or not.

First, our union is responsible for sustaining our collective-bargaining agreement (CBA). It provides us with strong protections against managerial encroachment into our areas of responsibility (including curriculum) and grants job protections not found in many colleges and universities. While none would find all its provisions ideal, its sacred provisions are no more secure than our vigilant observance of all of its provisions. It is because of the contract that the swim coach was able to recover years of underpayment (ultimately in one lump sum) resulting in a “$400,000” paycheck in one year. Given the testimony of Chancellor Brogan earlier this year, there can be little doubt that, without our CBA and our union, more and more faculty would be hired on a contingency basis, for less and less pay, with fewer and fewer benefits, in fewer departments in a system with fewer universities.

A retired colleague used to quip that ever since it was invented, money has been the universal currency of appreciation. Our CBA delivers on pay. No pay comparison can easily capture all the permutations of subfield and compensation, but according to Chronicle of Higher Education data on pay, many State System university salaries for the ranks of professor and associate professor — regardless of gender — rate in the top 15 percent nationally for large master’s universities. Those ahead of us are predominantly private institutions, a handful of public universities in New York and New Jersey and one or two Penn State operations. The salaries at these ranks lay claim to being the best benchmark overall as they are the ones most faculty will ultimately earn. As to adjunct faculty specifically, our contract is seen as a model nationally, in particular its provision on conversion of adjunct positions to tenure-track status. Further, our CBA caps the number of adjunct faculty at 25 percent of the total, providing a bulwark of job security for three-quarters of our members, while ensuring that we have experienced and committed faculty members in our classrooms.

While the Chronicle data do not address healthcare benefits, no less an authority than Chancellor Brogan stated to the Pennsylvania House of Representatives State System budget appropriations hearings that our health plan is “not a Cadillac plan alone, it is a Cadillac with fins. It is an extraordinary health care plan, and stack it up against the rest of the country in higher ed, it is one of the best that I’ve ever seen and that some of our experts have ever seen.” So good, in fact, Brogan suggested, it needs to be curbed. Brogan suggested that after his initiatives to boost co-pays, deductibles, etc., our benefits would still be equal to those at Penn State and Pitt — both nonunion universities. Apparently Pitt faculty are thinking about that, too. In December, TribLive.com reported that a unionization drive there had begun.

Our union is also responsible for the provision of our outstanding dental and vision plan that covers faculty and their dependents. No premium is required, with benefits based on full- or part-time status.

Our union also presents our interests and concerns to the university administration through the “meet-and-discuss” process. Through these efforts, APSCUF chapters have been able to obtain detailed financial records that allowed us to challenge the administration’s proposal to eliminate faculty members’ jobs through retrenchment. Absent our union’s effort, many of these jobs would surely have been lost. It is also through meet-and-discuss that APSCUF chapters are able to address various policy concerns. This past year, for example, APSCUF-KU was able to persuade management to modify an ill-guided policy on snow days that would have docked faculty for not attending meetings scheduled for days when classes were cancelled due to inclement weather. A parallel process occurs at state-level meet-and-discuss, where APSCUF has consistently resisted management’s worst inclinations.

One of the key functions of our union is often unseen by the membership as it deals with confidential matters, representing individual members both in the grievance process and when members are being investigated in disciplinary matters.

The leadership typically shares with the membership when a “policy grievance” has been filed or resolved. In these, APSCUF chapters file a grievance on behalf of all members when the management attempts to institute a policy or procedure that violates the CBA. What are not shared are individual member’s grievances, which are confidential personnel matters. These can range from the “miscalculation” of overload payments to significant violations of tenure or promotion procedures. Our union is broader than each campus; our CBA serves all 14 universities, and we draw strength from each school’s efforts. For example, over the past few years, a series of grievances from across the system decided in APSCUF’s favor have supported faculty against the imposition of extra-contractual standards in the tenure and promotion process.

One of the most valuable affordances of any union is representation and defense in the face of investigation and discipline under CBA Article 43. This is a service that APSCUF frequently provides — about as often as a full moon at Kutztown University alone. The union’s job in such cases is to ensure the due process rights and to represent, zealously, those accused, some of whom are clearly falsely accused of wrongdoing and some of whom may have been less-than-outstanding citizens in every way. The union represents both (or even multiple) sides in these disputes. It therefore cannot help but rankle and bother, just by doing the job it is tasked with doing. Occasionally, conflicts among faculty break along lines of gender, age, rank, or race, exacerbating pre-existing tensions in society at large.

If this volume of litigation surprises you, it may be because the union has been doing one thing it is supposed to do very well: hold confidential matters of personnel. The mere leveling of allegations stains and injures the accused, regardless of guilt or innocence.

Our union also supports a dedicated and talented staff at the APSCUF office in Harrisburg. Six staff members, including lawyers, comprise our labor-relations department. Two staffers support member services. Their expertise on the healthcare benefits afforded by our CBA is extremely valuable. Our government-relations and communications department provides professional support and engages the legislative and executive branches of our state government. They are crucial in sharing our communications with the public and among members. Their efforts on behalf of our opposition to painful budget cuts and other legislative misery have been heroic.

APSCUF also enlists the support of law firms to assist with matters of the CBA and in the negotiations process. Our most recent contract, in addition to the compensation considerations discussed above, also charts new ground in areas such as class size. Recently, APSCUF solicited a legal opinion to help clarify the tenure and promotion process. That opinion, grounded in the CBA and statutory law of the Commonwealth of Pennsylvania, supports each applicant’s prerogative to choose their own path in pursuit of continuing scholarly development. It is a finding I believe to be increasingly important as disruption continues to rile the scholarly community, where research in social and physical sciences is ever more the province of corporations—exactly as public support for university research falters.

As faculty, our combined contributions to our Committee for Action in Politics (CAP) have afforded us access to legislators and the ability to help candidates who support affordable quality public higher education and the rights of organized labor. We should feel honored that an APSCUF endorsement is cherished among office-seekers. This is because they and their constituents value what we do. Our CAP’s decision to become the first statewide union to endorse Tom Wolf in his campaign for governor turned out to be an extremely judicious use of our support, as it earned us valuable recognition. Gov. Wolf has gone on to attempt to begin to roll back the devastating budget cuts imposed under his predecessor.

In short, we are blessed with a powerful and effective faculty union. Our union continues to deliver on the issues of greatest concern to our members.

It is our great challenge to surmount the divisions that confront us, and to unite in the more powerful commitments that bind us together as one, and to recognize and value the work we all do for each other—including the countless hours scores of APSCUF members give to our cause day in and day out. Our union must unite as one if we are to succeed as one.

Our union is our collective voice, and it is the only voice in the Commonwealth of Pennsylvania consistently committed to supporting the goal of affordable quality public higher education in our state. Our mission is great, our cause is just, and the future of affordable public higher education in this state hangs in the balance. Our union gives us the opportunity to fulfill that mission, serve that cause and secure that future. It is built upon the voluntary efforts of scores of faculty like yourself. It deserves our enthusiastic support!

Dr. Glenn W. Richardson Jr. is a professor in Kutztown University’s Department of Political Science and Public Administration and is an APSCUF-KU delegate.