Our guest post today is by Dr. Glenn W. Richardson Jr. of Kutztown University. These are his edited comments to APSCUF’s legislative assembly in Williamsport in April. Richardson chairs APSCUF’s statewide legislative committee and is a professor in Kutztown’s Department of Political Science and Public Administration. 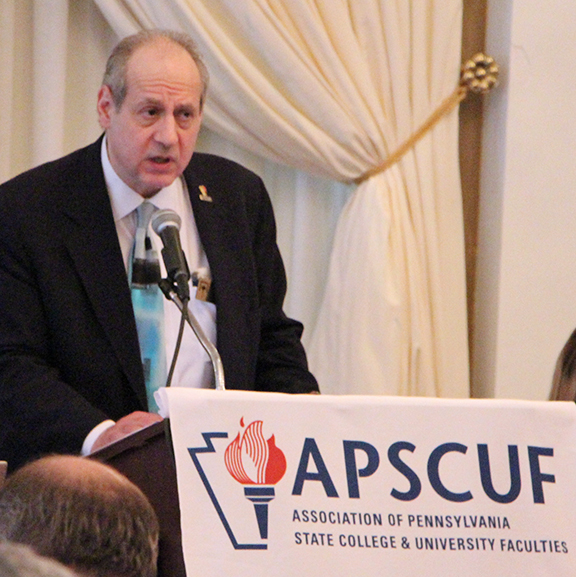 Over the years, I have spoken to you about the great challenges and opportunities that we in the organized labor movement face.

Our challenges have not lessened.

We are decades deep into a revolt of the overclass. A billionaire-led disruption of the institutions of our democracy. We are not winning.

When this plutocratic uprising began in the early 1970s, workers’ share of the gross domestic product had reached a high of 52 percent. In the aftermath of the Great Recession, workers’ share bottomed out at 42 percent. By the fourth quarter of 2016, it had risen to 43 percent. It is lower now. (U.S. Bureau of Economic Analysis, St. Louis Fed)

Meanwhile, business profits continue to rise. They accounted for less than 12 percent of domestic income in the 1980s; today that share has nearly doubled, to over 20 percent. (Kiernan, Paul. 2019. “Workers Claim a Shrinking Slice of the Pie.” Wall Street Journal. February 25. A2.)

Perhaps that understates the degree of economic concentration we face. Since 1980, the income of the top .01 percent has skyrocketed by more than 400 percent. The share of the nation’s income captured by the bottom 90 percent of the income distribution actually shrunk over that period. (Piketty, Saenz and Zucman n.d., Bureau of Economic Analysis; cited in Leonhardt, David. “How the Upper Middle Class in America is Really Doing.” New York Times. February 25, 2019. A 23.)

Since 1979, median weekly earnings have risen by less than 1 percent. The net worth of the typical American family is lower today than what it was 20 years ago. Perhaps most disturbing: life expectancy is lower than it was at the beginning of this decade (Leonhardt, David. 2018. “When CEO’s Cared About America.” New York Times. December 3. A27.)

Over this period, local labor markets have become increasingly dominated by a smaller number of employers. Unions have been weakened. Today’s employment contracts are packed with noncompete agreements and other impediments to worker mobility.

It wasn’t always this way.

In the post-war era, corporate America embraced a mixed economy, acknowledging the role of government regulation and strong labor unions. During the 1950s and 1960s, middle-class incomes grew faster than those at the top (Leonhardt, David. 2018. “When CEO’s Cared About America.” New York Times. December 3. A27.)

Today’s economic elite prefer a different path. According to a study of 600 elite technology company leaders and founders by two Stanford professors, our typical tech overlord “believes in free markets, supports gay marriage, likes environmental protection, hates unions, and distrusts regulation.” They support higher taxes to fund social programs, but prefer that they be run by entrepreneurs, such as charter schools. (Tarnoff, Ben and Moira Weigel. 2019. “Next Gen: Is Silicon Valley growing away from its liberal and libertarian origins.” The New Republic. (March) pp. 4-6.

The evidence does not support their preferences. For example, a major report by the Rand Corporation found that a $575 million project partly funded by the Gates Foundation to use student test scores to evaluate teachers (thereby improving student outcomes such as increased graduation rates for low-income minority students) failed.

In his book Winners Take All, (Penguin Random House, 2018) Anand Giridharadas notes the paradox: ever concentrated wealth in the hands of a philanthropic elite seeking to do good but failing. In an interview with Amy Goodman of Democracy Now he asked: is the do-gooding not working? Not working fast enough? “Or is it that charity and philanthropy are part of how they maintain the system that allows them to keep taking it all.”

But APSCUF, there is hope!

And comes from the very belly of the beast. Tech workers in Silicon Valley are rising up! They are challenging corporate behemoths like Google, that lobbied to weaken workers’ rights to organize. If Google had its way, the company could legally punish anyone who used company email to organize protests, circulate petitions, or form a union. Google workers have already walked out to protest sexual harassment, military contract and collusion with Chinese censors.

And the thing is, these tech workers are saying they are inspired by us: by the educators who have stepped to the front of the organized labor movement in recent years. “A Google worker who helped lead the anti-Pentagon campaign last year cited the influence of ongoing teacher strikes: ‘It’s time for us to join the new labor movement,’ the worker told Jacobin.” (Tarnoff and Weigel. 2019. “Next Gen: Is Silicon Valley growing away from its liberal and libertarian origins.” The New Republic. (March) pp. 4-6.)

So there is hope, APSCUF!

And it starts with us!

And we will not give up!