APSCUF President Dr. Jamie Martin and APSCUF intern Melissa Stough spoke about the need for state support of public higher education today during a press conference introducing the Nellie Bly Scholarship bill. Click here to read the bill, and click here to read more about how you can advocate for the plan to provide money to Pennsylvania’s State System of Higher Education students and help graduates earn their degrees with little to no student debt. Other speakers were Sen. Wayne Fontana, Sen. Tim Kearney, Tanya I. Garcia of Pennsylvania Department Of Education, and Adam Oldham of Pennsylvania School Counselors Association.

Good morning. My name is Jamie Martin, and I am the president of the Association of Pennsylvania State College and University Faculties (APSCUF). APSCUF represents about 5,000 faculty and coaches who work at Pennsylvania’s fourteen state-owned universities. 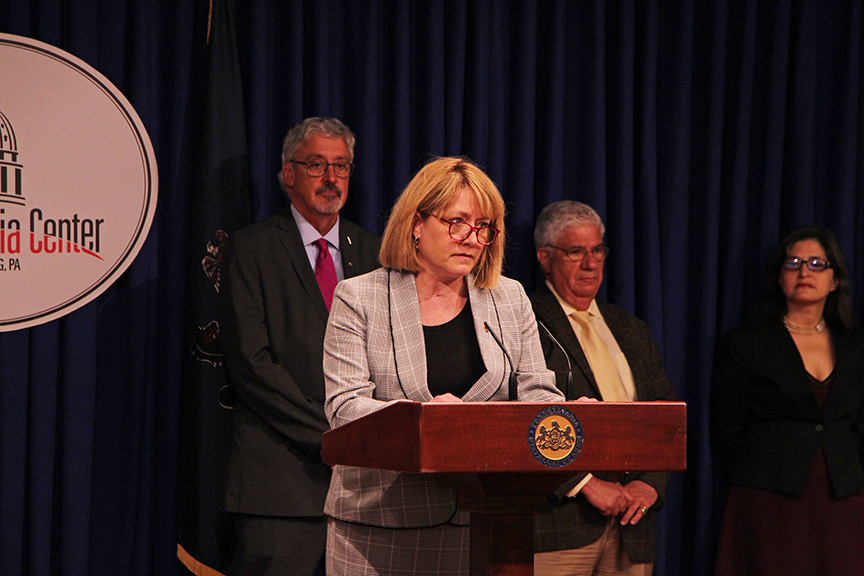 APSCUF President Dr. Jamie Martin discusses the student-debt crisis in Pennsylvania. “Luckily, there is a very real legislative solution proposed by these legislators committed to providing our amazing students with the support they deserve,” she said during a June 15 press conference introducing the Nellie Bly Scholarship bill. Photo/Kathryn Morton

Today I am proud to stand here on behalf of APSCUF and support the Nellie Bly Scholarship proposal. I want to thank Sen. Fontana, Rep. Harris, Gov. Wolf and all the supporters who have recognized the need for this game-changing scholarship proposal for our State System students.

We face a student-debt crisis here in Pennsylvania. Policy choices have led to devastating consequences for students attending public universities in the Commonwealth:

So what caused these rankings and this crisis?

A new report from the State Higher Education Executive Officers Association (SHEEO) shows that Pennsylvania saw the largest negative change in the nation in state general-operating appropriations between 2001 and 2019, with a drop of 53%.

This trend needs to stop, and, luckily, there is a very real legislative solution proposed by these legislators committed to providing our amazing students with the support they deserve. We cannot cut our way out of this funding and affordability crisis. Pennsylvania needs to take a moment to reassess our priorities and figure out creative ways to grow and strengthen our remarkable institutions of public higher education. That same SHEEO study shows that increased state funding leads to increased enrollment and improved graduation and completion rates. These are important outcomes.

The Nellie Bly Scholarship program would be a game changer for our Commonwealth and public higher education. Imagine the impact of these scholarships on the estimated 44,000 students attending a university in the State System of Higher Education who would be eligible recipients. These scholarships could assist the students who will become our future teachers, nurses, business owners and even legislators. The Nellie Bly Scholarship proposal puts students first and addresses both affordability and student debt. The overall impacts of this plan will be significant. Pennsylvania will realize a huge return on investment when students graduate with little to no debt and begin their careers in the Commonwealth. College graduates will contribute to the economy by buying vehicles and homes, becoming taxpayers, and spending dollars on Main Street rather than paying off loans to private lenders. This scholarship program will break down one of the largest barriers students face: cost. Think of the benefits to the students our state-owned universities serve, if students can focus on succeeding academically instead of how to make that tuition payment or being behind on their room and board.

APSCUF is proud to support this proposal that benefits students, fights student debt, benefits our economy, and develops our future workforce. We look forward to working with the legislature to pass this proposal.

I think it is important to hear how the Nellie Bly Scholarship program could benefit students — and to hear it from a student. I want to introduce Kutztown University student, Melissa Stough.

Good morning! I am so honored to be here to discuss the importance of an affordable college education. I began my college journey at a private institution with very few students, but that promised to give me substantially more money than any state university. After I was pulled in by this promise of opportunity and financial aid, I began to realize the limitations of a private college education. 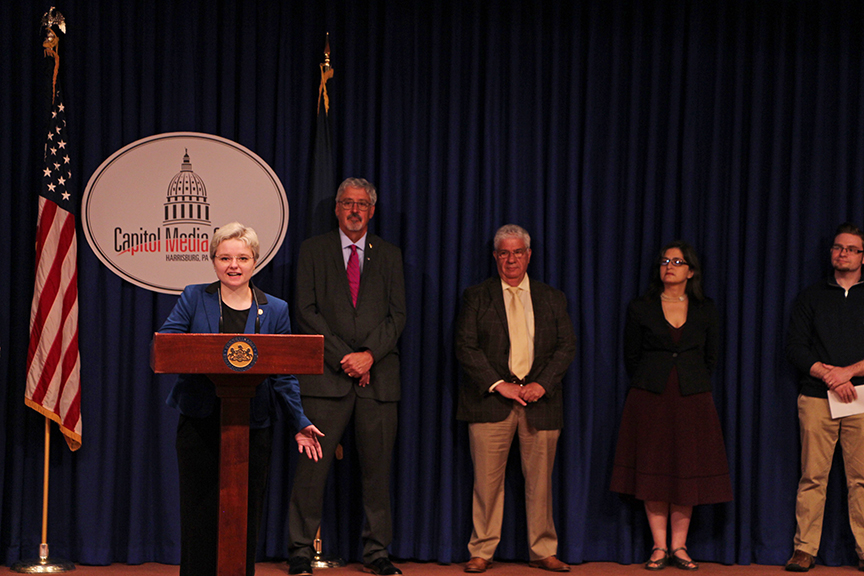 The campus lacked resources. We did not have a women’s center, an LGBTQ+ center or a multicultural center. I found myself feeling suffocated by this lack of access to resources and my peers expressed similar feelings to me in private. We were stuck. Without proper assistance, we could not afford a state university, but if we stayed at our private college, we would never be able to embrace our identities to the fullest extent or feel supported by the school’s governing bodies.

With resources such as the Nellie Bly Scholarship, students will not have to make that choice between embracing their identities and receiving an affordable, quality public education. I have seen firsthand the effects of student-loan debt as many friends had to withdraw from universities or take on three jobs to make ends meet. Friends suffered from financial and academic stress, taking a toll on their mental health, and negatively affecting their overall ability to achieve as a student.

The Nellie Bly Scholarship gives students an opportunity to hone their academic and professional skills, and give back to Pennsylvania communities in need. Much like Nellie Bly herself, who risked her credentials, her very livelihood in order to expose the flaws in the mental healthcare system in the 19th century, students are risking their financial and mental stability for the sake of pursuing higher education. However this is not the 19th century, so resources such as these are long overdue.

I’d like to conclude with a quote from Nellie Bly. She stated: “Energy rightly applied and directed will accomplish anything.”

By assisting students through greater funding and financial aid, you are rightly applying that energy toward Pennsylvania’s future leaders and ensuring our success.