Michelle Jones-Wilson studied the letter in her hand; she read that she was to be retrenched. It was 2013, 13 years after she joined APSCUF, and she discovered how much people cared about fellow APSCUF members and colleagues, she said. 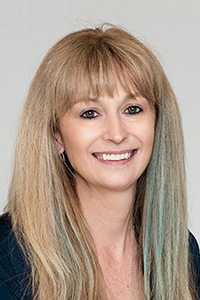 “I think that (receiving a letter) made me realize what was involved in saving peoples’ jobs,” Jones-Wilson said. “I got a real window into the dedication of other people. It wasn’t their job. They didn’t have letters. But they fought as hard as if it was (for) their letters.”

After working with her colleagues to save her job and others, Jones-Wilson, a professor at East Stroudsburg University in chemistry and biochemistry, remains active in the ESU chapter of APSCUF. In April, she was elected an officer-at-large for State APSCUF.

“Dr. Jones-Wilson is one of the most energetic professors at ESU and a dynamic supporter of APSCUF … She is currently also chair of chemistry, and she has been a member of a grant team that secured a National Science Foundation grant that helps recruit community college students into our STEM field majors,” Nancy VanArsdale, president of the APSCUF ESU chapter, said. “She is an absolutely terrific role model for so many of our women STEM majors, too.”

As a first-generation college student and a scientific analyst, Jones-Wilson said she wanted to work at a Pennsylvania State System university to help students succeed. She said APSCUF is a part of her identity that cannot be separated from her work as a professor and said that APSCUF assists her in the classroom.

“It is across the board, treating everyone the same — supporting everyone no matter their background, equitably and with a fair playing field with everyone,” she said.

“I always viewed Michelle as a leader — even without the titles,” McClanahan said. “She has always had a power of conviction when it comes to justice and making sure that people are treated fairly.”

Jones-Wilson said she hopes to be seen as “determined” and “fair.”

“I find justice to be extremely important,” she said.

“Michelle is a true leader who keeps our chapter informed and updated,” VanArsdale wrote in an email. “I consider her a wonderful friend, and I so admire how she is a fabulous mother who is raising two amazing sons.”

APSCUF, to Jones-Wilson, is like an extended family, she said. Over the years, Jones-Wilson established herself as a member of local and State APSCUF groups, and she said she continues to notice the changes in APSCUF leadership and structure. There are more challenges than ever, and although many aspects of APSCUF have changed socially, APSCUF’s mission remains the same, she said.

“People really care,” Jones-Wilson said. “They (APSCUF and its members) try to support and make things right, even though the funds and resources and energy are out of proportion to faculty. That is how it should be. It doesn’t matter, because at some point it could be your school that needs your support.”

Amid the plans for State System redesign, Jones-Wilson said she wants to contribute her support for public higher education funding and hopes to make a difference.

Jones-Wilson enjoys a variety of activities beyond her APSCUF service and research on STEM student-performance levels. She practices indoor hobbies such as sewing and outdoor recreational activities such as kayaking and bicycle riding.