PASSHE’s Administrative Bloat: Just How Many Managers Does It Take? 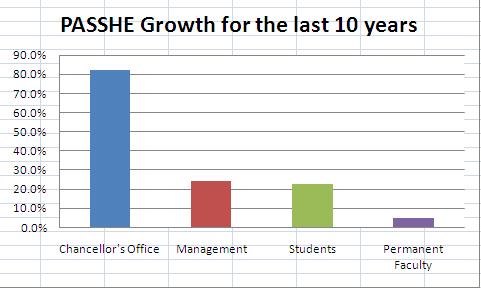 Sometimes it’s just plain hard to not snicker, smirk, or just outright laugh.  As our PASSHE officials and local managers preach about dire financial situations, as they strip away release time and pare down summer schools,  as they arbitrarily increase class size, you might be thinking, “something here is just wrong.”  Well, it is.  Honing in on “faculty productivity,” they have conveniently overlooked managerial prodcutivity.  But there is now substantial evidence that things are out of whack.

Last month the Goldwater Institute stirred up controversy with its report, “Administrative Bloat at American Universities: The Real Reason for High Costs in Higher Education.”  While we don’t agree with its recomendations, the report convincingly demonstrates how at large public universities, growth of administration/management has grown disproportionately to the size of the student body and faculty.

But, what of PASSHE?  The evidence is perhaps even more startling than you might have anticipated:

As PASSHE prepares to retrench, as the Chancellor’s Office shuts down core programs, as they alter our very understanding of what a college education is, what has the Board of Governors done?  At its last meeting, the Governors saw fit to congratulate the Presidents on their efforts to control costs!

At our local meetings, in our conversations with administration, in our contract discussions, we must put our collective feet down.  We cannot and ought not be complicit in PASSHE’s bizarre priortities.  Our students deserve better.

Further, this irresponsible growth provides dangerous fodder for those legislators, gubenatorial candidates, and outside groups (like the Goldwater Institute) to argue that our Universities can get by with even less public funds.

PASSHE has made much of its “workforce planning.”  Thus far, little of this planning has been shared with APSCUF.  It’s no wonder.