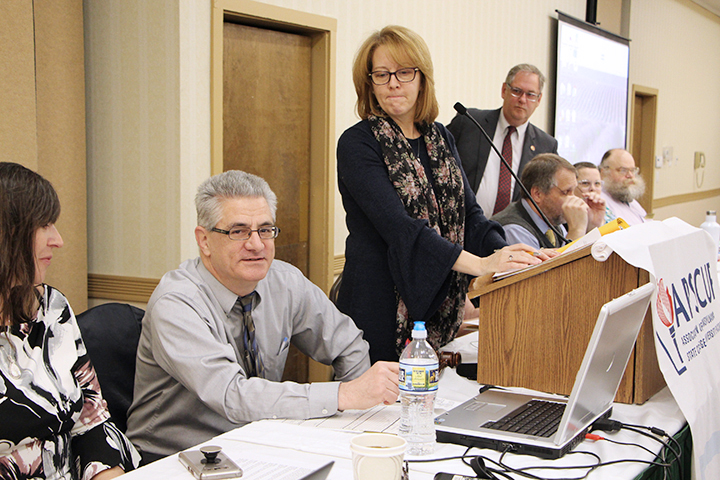 Joseph Miele, second from left, announced he was stepping down as State APSCUF parliamentarian at legislative assembly in April. The professor of psychology plans to retire from East Stroudsburg University in two years. Photos/Kathryn Morton

Out of all 28 years Joseph Miele has been an APSCUF member, his fondest memory stems from the strike of 2016. Standing in solidarity with his fellow East Stroudsburg University colleagues on the picket line, he says, was “an exhilarating moment.” Although he would have much rather been in the classroom teaching, the unity of faculty and students demanding quality public higher education was an outstanding time that he said he will never forget.

Miele is stepping down from his position of State APSCUF parliamentarian, a role he has held since February 2016, and the professor of psychology plans to retire in two years. He originally took on the APSCUF role because he knew a little about the rules and wanted to help the organization, he said.

APSCUF President Kenneth M. Mash, a political-science professor at East Stroudsburg University, praised Miele for his work ethic, “even-keeled temperament,” and deep and abiding commitment to APSCUF service at both the state and chapter levels. 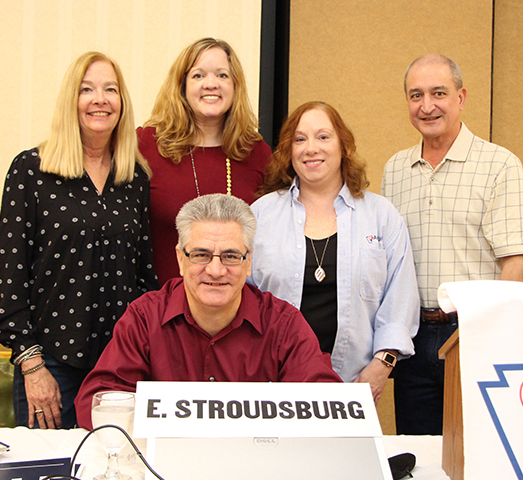 Miele, seated, with the East Stroudsburg contingent in April.

“Joe has done amazing service,” VanArsdale said, describing Miele’s APSCUF work, including as ESU grievance chair, meet-and-discuss chair, helping to rewrite sabbatical guidelines, and as a legislative assembly delegate. “He was also one of our strike captains in the big and successful strike. Many, many faculty go to Joe, often on a weekly basis, to get guidance related to interpreting the CBA.”

Miele has seen APSCUF evolve into an organization that works with individuals and stands up to the state when it defunds education, he said. The greatest thing a union has to offer is the balance it creates with management, he said.

“Every member needs to know someone has their back,” Miele said. “We know what happens when the balance shifts too much one way or the other. When there’s good balance, there’s good productivity.”

Miele said he will be sad to say goodbye to some of the great APSCUF friends he’s made over the years. As he begins his farewells, Miele advises members that you “get out of APSCUF what you put into it.” You might not always win, but if you’re open-minded and willing to work with the administration, great things can happen, he said. For the incoming parliamentarian, he also suggests proficiency in “Robert’s Rules of Order.”

He said he plans to stay in eastern Pennsylvania, wants to get involved in local charities and help people locally, and also join a classic-car club, as he drives a 1979 Cadillac Eldorado.