Why faculty unions matter in 2016

Our guest post today is by Dr. Amanda Morris of Kutztown University.

Faculty unions are the antidote to the poison of austerity, uncertainty, and fear that has taken hold at many of our universities. If the faculty of Mount St. Mary’s were unionized, the recent kerfuffle probably would not have happened, and if it had, there would now be a flurry of grievances that would tangibly hold university administration accountable for the actions of its president. After comparing students to bunnies who should be drowned or killed with a Glock, the Mount St. Mary’s president was called out in the student newspaper, responded by firing two faculty members, and has since decided to extend “mercy” and reinstate those faculty members. But the damage has been done. Faculty are nervous, uncertain about their futures, and afraid to speak out. A faculty union would stand between the faculty and any administration that abuses its power so boldly. Mercy, indeed.

States such as Pennsylvania and Illinois are currently in budget stalemates, refusing to uphold their financial responsibilities to their own state systems of higher education. This state of austerity has been in place for several years, and it seems to be coming to a head in 2016 for many of us. In Pennsylvania, our State System has flat funding for 2015-16, which is far from ideal, but also far from what is happening at Western Illinois University, where 34 faculty will be fired this year along with staff who have already been let go. The university will also eliminate 24 programs and consider cutting 17 more. According to the McDonough County Voice, “The layoffs are part of the university’s strategy to cut $10 million from the 2017 fiscal year budget, which starts July 1. A state budget impasse is approaching its eighth month, and the university hasn’t received state appropriations and Monetary Award Program grant funding for the current 2016 fiscal year.” 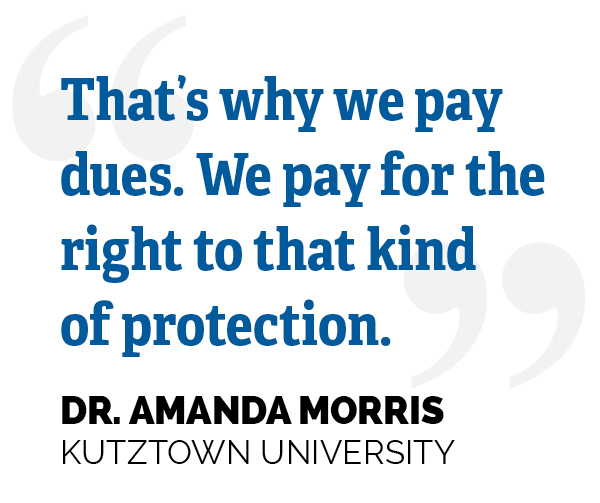 This should sound familiar to those of us who work for the Pennsylvania State System of Higher Education. APSCUF recently sponsored a rally for students in Harrisburg to fight for adequate funding of our system. PA legislators remain recalcitrant and unwilling to do their jobs by passing a state budget that improves funding of the STATE university system. Students and faculty are understandably annoyed, but so far none of our faculty has been fired during this current budget standoff. We stand in solidarity with our brothers and sisters in the WIU UPI Local 4100.

Faculty unions are the gatekeepers that hold rogue administrations at bay, demand they provide proof before acting, and refuse to allow whims or personal opinions or hurt feelings to guide hiring and firing decisions. Faculty unions are keenly aware that people’s livelihoods are at stake and work long hours with university officials and financial documents to find ways to save faculty jobs. I know that’s what APSCUF does for us. That’s why we pay dues. We pay for the right to that kind of protection.

When I joined the faculty of Kutztown University in 2010, I was new to the union. No position I had ever held in journalism or advertising had the option or benefit of union backing and protection. Since becoming a KU faculty member, I have seen colleagues’ jobs and departments saved because of our union’s refusal to back down. No matter what minor irritations we must accept as realities of having a faculty union in place, it is all worth it. Faculty unions are the antidote in uncertain, fearful, and austere times. Join today. You won’t be sorry.